The Weir and Spillway

BREAKING NEWS - the Fishtrap dam is to undergo a renovation and repair project towards the end of September, 2019.  The project will take 2-3 weeks and will involve the replacement of the "bypass" pipe.  The construction technique will involve the use of a coffer dam to access the existing, rusting pipe and hopefully will involve an insignificant amount of draw-down of our lake Level.

A temporary dam structure constructed to allow work to proceed behind it without standing water.  Cofferdams may be constructed using interlocking steel pilings, sandbags, or steel braces covered with flexible sheeting (as in the illistration above).

A man-made dam has been holding a pool of water in the High, Rush, and Fishtrap lakes area for over 125 years. The Fishtrap dam was created toward the end of the nineteenth century in support of the extensive pine-logging activities in our area. Sister dams were also constructed at the base of Boulder Lake and Rest Lake for the same purpose. The Fishtrap Lake dam was constructed by Chippewa Lumber and Boom Company in a cooperative arrangement with the Mississippi River Logging Company, both of which were under the control of Frederick Weyerhaeuser, an industrialist who immigrated to the United States from Germany in 1852. Timber product was floated downstream through the Manitowish, Flambeau, and Chippewa River system, accumulating at a location known as the Beef Slough, before emptying into the Mississippi River system. The logs were destined for mills in the Chippewa River valley and on the Mississippi River to various locations as far south as St Louis, Missouri.

The dam location is about one mile southwest of Fishtrap Lake on Dam Road, on the Manitowish River. Originally constructed for logging purposes, the dam was made of earth and timber construction and was designed to hold back five to eight feet of water depth at the dam location (6.5 feet was normal). The ponded water was released periodically to sluice logs down the river. A 1914/15 inspection report, contained in the Wisconsin Department of Natural Resources (WIDNR) Dam Safety file, noted that the dam was probably 20-30 years old at that time, but the control gates had been burned out and the dam structure was nearly destroyed by fire.

Pictures of the original dam structure after a fire destroyed the main sluice gates shows that the impounded water at its peak levels would have been significantly higher than what is currently experienced today. At today's water level, it would be hard to imagine sufficient flotation capacity to move the huge cut timbers downstream. This delivery mode of the rough-cut product worked only for the substantially more buoyant white pine, cedar, and fir trees. Thus, at the end of that "pine cutting era," the dam no longer served that purpose and is perhaps why it was destroyed by fire in 1914 or 1915.

Notations from December 1922 and 1927 stated that the dam had been washed out which provided an unobstructed river flow in the old sluiceway. A drawing of this original dam shows the presence of a fish-way, indicating that fish migration past the dam site was normal. A remnant Lake Sturgeon population is likely to have still been present in the upper Manitowish River at this point in time. This is an interesting fact in that there is a controversial proposal by the DNR to dramatically change the operational guidelines of the Rest Lake dam for the primary purpose of facilitating and enhancing sturgeon passage and reproduction.

By 1935, a new rock-fill dam with a timber spillway had been built at the site, likely by the Wisconsin Conservation Department under the auspices of Depression-era work programs. File photos and drawings show a scenic footbridge and a fish hatchery building. Water level measurements indicate that this new dam was holding 5’ 9” to 7 feet of water above the downstream level. The Conservation Department ceased operating and maintaining the dam and hatchery by June, 1940. The site was left to deteriorate for the next 40 years, but the dam still held up six to seven feet of water through 1980. A file notation from 1965 states: “The dam consists of a few old timbers and boulders." Emergency repairs to the top of the dam were made in 1967 due to over-topping (flooding).

CURRENT OPERATION
Concerns of potential downstream flooding in the event of a failure at the Fishtrap Dam led to its reconstruction. Photos from 1985 show the new rock-lined spillway with a concrete overflow weir (a simple water barrier structure) in its present form. The 40-foot-wide weir is designed to do the following: (1) maintain upstream pool elevation; (2) pass water downstream during low-flow periods to maintain river health; and (3) discharge flood flows. A buried-pipe bypass structure with removable stop-logs was added in 1988. The bypass allows the water above the dam to be lowered for maintenance purposes and also to increase downstream flow during high-water events such as happened in 2014.

The WIDNR established a desired upstream pool elevation of roughly ¾ inch above 1638.50 feet above mean sea level for the new dam system. This is approximately 5’ 2 ½ “ above downstream river level and near the historic range for the previous dams. An interesting note in the WIDNR dam file indicates that establishing the pool elevation involved working with Wittig’s Resort to avoid creating a water level which was too high and thereby would cause flooding in their basement. To meet this need, the maximum operating level at the dam is set at 5’ 4.6 “ above the downstream river level (which is 2.9 inches above 1638.50 feet elevation). For those that prefer a visual perspective, we have included some very rough engineering drawings which may help explain the above narrative. 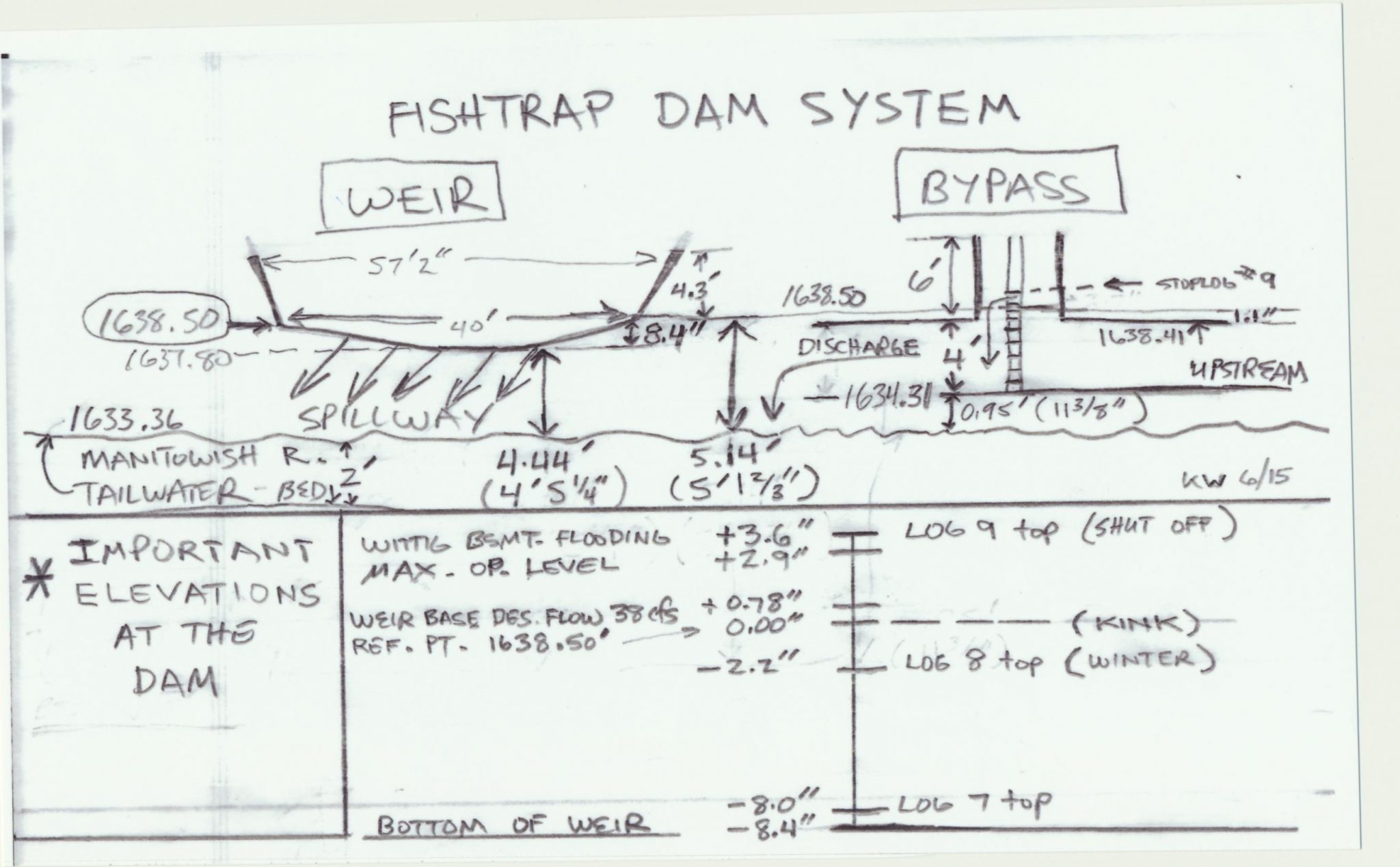 Lake levels naturally rise and fall each year due to weather-related precipitation and evaporation, groundwater flow effects, and spring inflows and outflows. This is normal as natural lakes are never fixed pools. We are fortunate that the Fishtrap Dam and our very large watershed area combine to deliver a relatively stable range of lake levels, technically referred to as the "pool level." The lowest level of the dam weir is fixed at 8.4 inches below 1638.50 feet elevation. The by-pass structure with the upper stop-log in place is at a similar level. Historical observations have not seen the weir dry or a lack of flow in the bypass, even during the extremely low precipitation period in late September, 2012. This would indicate that our lake pool elevation is seldom, if ever, more than 8 inches below 1638.50 feet elevation.

The bypass structure was used to lower the pool below the weir elevation during late 2004 so that repairs could be made to the concrete weir, and again in late 2006 for repairs of the spillway caused by erosion. It is not known how far the pool was drawn down, but lake levels during these repair periods are likely to have been the lowest in recent memory. Coincidentally, this is about the time that Fishtrap Lake experienced the explosive growth of the southern naiad aquatic plant. Water levels returned to normal by spring 2005 and 2007.

As noted above, the bypass structure contains removable stop-logs which can be used to manipulate or manage the pool water level. A plan was developed to use the stop-logs to lower water levels during the winter months to minimize ice damage, but there are no notes in the dam file to indicate that the plan was ever implemented.

Using the data above, it appears that our maximum range for lake level fluctuation would be around twelve inches from low to high. Low water would be 8.4 inches below 1638.50 feet elevation, and high water about 3 inches above such mark although the level reached 5.5 inches above during the very wet spring of 2014. Beginning in 2013, members of the High-Fishtrap-Rush Lakes Association (HFRLA) initiated a program to regularly monitor water levels at the dam in addition to conducting rudimentary inspections of conditions in and around the dam area. Those findings are communicated to WIDNR officials who take appropriate management actions as necessary. Lake levels have been maintained much more consistently at, or slightly above, 1638.50 feet since this monitoring program began.

Round Lake Replica Logging Dam
Take a field trip out Wisconsin 70 West from Minocqua to visit the Round Lake replica of what our local logging dams looked like at the turn-of-the-century. (Twenty miles east of Fifield off of Forest Road 144) 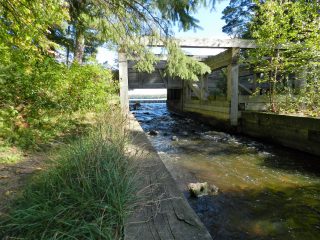